Now that the holidays are over, we’re all feeling the effects of going overboard on eating the junk foods of the holidays. I admire anyone that can stay in control over the holidays, but I’m not one of them.

So now it’s time to get back in shape. And I’m beginning by making the small changes in my diet that are simple to do but add up to big health benefits.

Substituting egg whites for whole eggs is one way to save on fat, calories, and cholesterol in your diet.  But Egg Beaters, the most well-known commercial product, are expensive.

Here’s a simple and frugal recipe to make your own.

Mix together in a blender:

Blend until thoroughly mixed. Keep in a refrigerator, or freeze in individual portions. (How to freeze eggs)

Makes about three cups of Egg Beaters, with 1/4 cup equaling 1 egg. These eggs can be used for baking, scrambled eggs, and other cooked recipes.

Can be frozen until ready to use.

How to Separate an Egg 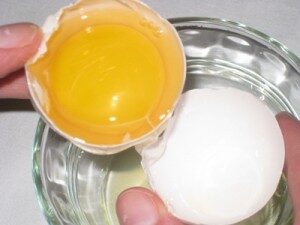 You will only need the egg white portion of each egg. You may use an egg separator if you have one to accomplish this step, or you may use the egg shell by doing the following:

If any egg shell pieces get into the bowl, use the empty half of the eggshell to scoop out the broken bits. This works much better than using your finger or a spoon.

Make Your Own Fruit Basket and Save Money