Here’s a great way to make your own homemade instant hand sanitizer, or Purell, as most people know it. But first some interesting tips.

A study published in the journal Emerging Infectious Diseases found that at least one brand of sanitizer found on store shelves, as well as some recipes for homemade versions circulating on Web sites, contain significantly less than the 60 percent minimum alcohol concentration that health officials deem necessary to kill most harmful bacteria and viruses, including the flu virus.

Hand sanitizers, whether store-bought or homemade, kill harmful bacteria and viruses using the alcohol portion of the solution. But straight Isopropyl Alcohol evaporates too quickly, so I mix it with 100% aloe gel. Here’s the recipe that you can use.

1 part aloe gel to 2 parts 91% Isopropyl Alcohol (I used 1/2 c. aloe & 1 c. alcohol). I reused the original Purell bottle, which reduced the plastic in the land fill, and promotes my reduce, reuse and recycle mantra! Shake up the mixture and you’re good to go.

I bought my aloe and alcohol from the local drug store. Be sure to buy the stronger 91% alcohol (or greater) or your mixture won’t have enough of that germ-killing ingredient. And look for those end-of-the-summer sales to stock up on aloe. 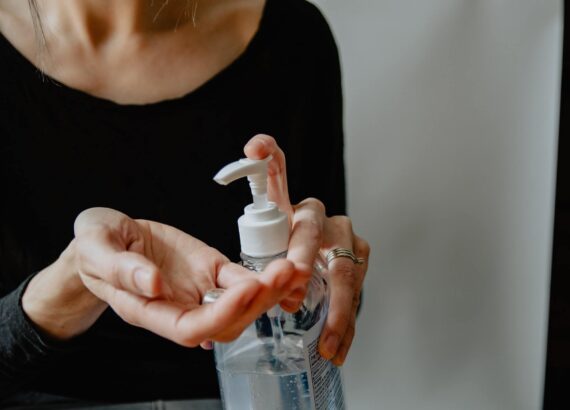 I would only suggest using hand sanitizer when washing hands with soap and water is not available. Studies have shown that hand-washing removes more harmful bacteria and viruses than sanitizers. But when that’s not possible, or to use in-between times, sanitizers are certainly a good option.

If you do buy your sanitizer at a store, you need to look carefully at the label before they buy any of these products. Check the bottle for active ingredients. It might say ethyl alcohol, ethanol, isopropanol or some other variation, and those are all fine. But make sure that whichever of those alcohols is listed, its concentration is between 60 and 95 percent. Less than that isn’t enough.

I checked 2 brands which I use – Purell and Germ-X. They both have 62% ethyl alcohol. Smile!!!! And my homemade version, even though it may be thinner than the Purell, is over 60% alcohol. Another smile!!!!