Home / Planners / Organization / Is Your Stuff Taking Over Your Life? 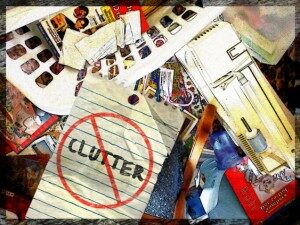 I just read a great article about how clutter, whether it be from stuff in your house or the stuff in your head, can take over your life. We’ve all seen Hoarders and listened to the Doomsayers on TV. Don’t become one of them…even a fraction of one of them.

This article particularly resonated with me because of my recent, downsizing move to a much smaller home. I had to release a lot of emotions surrounding giving up my long-collected treasured things. Not that they were all that valuable, but they were mine, mine, mine! Lovingly acquired over years of marriage.

But surprisingly, I found freedom from the confines of consumerism.  I’m happy now that I’m more organized and pared down.  Read the article below, and tell me how you feel.

Every single person I have met tells me not only about their own clutter problems but about those of a family member, or those of a friend. Nobody seems immune. The stories are not dissimilar—papers and magazines run amok, garages overflow with unopened boxes, kids’ toys fill rooms, and closets are so stuffed that it looks like the clothing department of a major retailer is having a fire sale.

The epidemic of clutter, the seeming inability to get organized, and the sense that “the stuff” is taking over affects us all. We are at the center of an orgy of consumption, and many are now seeing that this need to own so much comes with a heavy price: kids so overstimulated by the sheer volume of stuff in their home that they lose the ability to concentrate and focus. Financial strain caused by misplaced bills or overpurchasing. Constant fighting because neither partner is prepared to let go of their possessions. The embarrassment of living in a house that long ago became more of a storage facility than a home.

This clutter doesn’t come just in the form of the physical items that crowd our homes. We are bombarded every day with dire predictions of disaster and face many uncertainties—some real and many manufactured. Think about the perils that we’ve been warned about in the last decade alone—killer bees, Y2K, SARS, anthrax, mad cow disease, avian flu, flesh-eating bacteria…the list goes on and on. We are also faced daily with reports of war, an unstable economy and global terrorism coming very close to home.

Surprisingly, this endless barrage (its own kind of clutter) inspires many of the families with whom I work to finally take control of their own clutter. In an unpredictable, dangerous world that is out of their control, they look to their homes for stability—to get some degree of organization back into their closets, their garages, their home offices, their lives. This quest for organization is a deeply personal response to the feeling that the rest of the world is out of control. –Peter Walsh